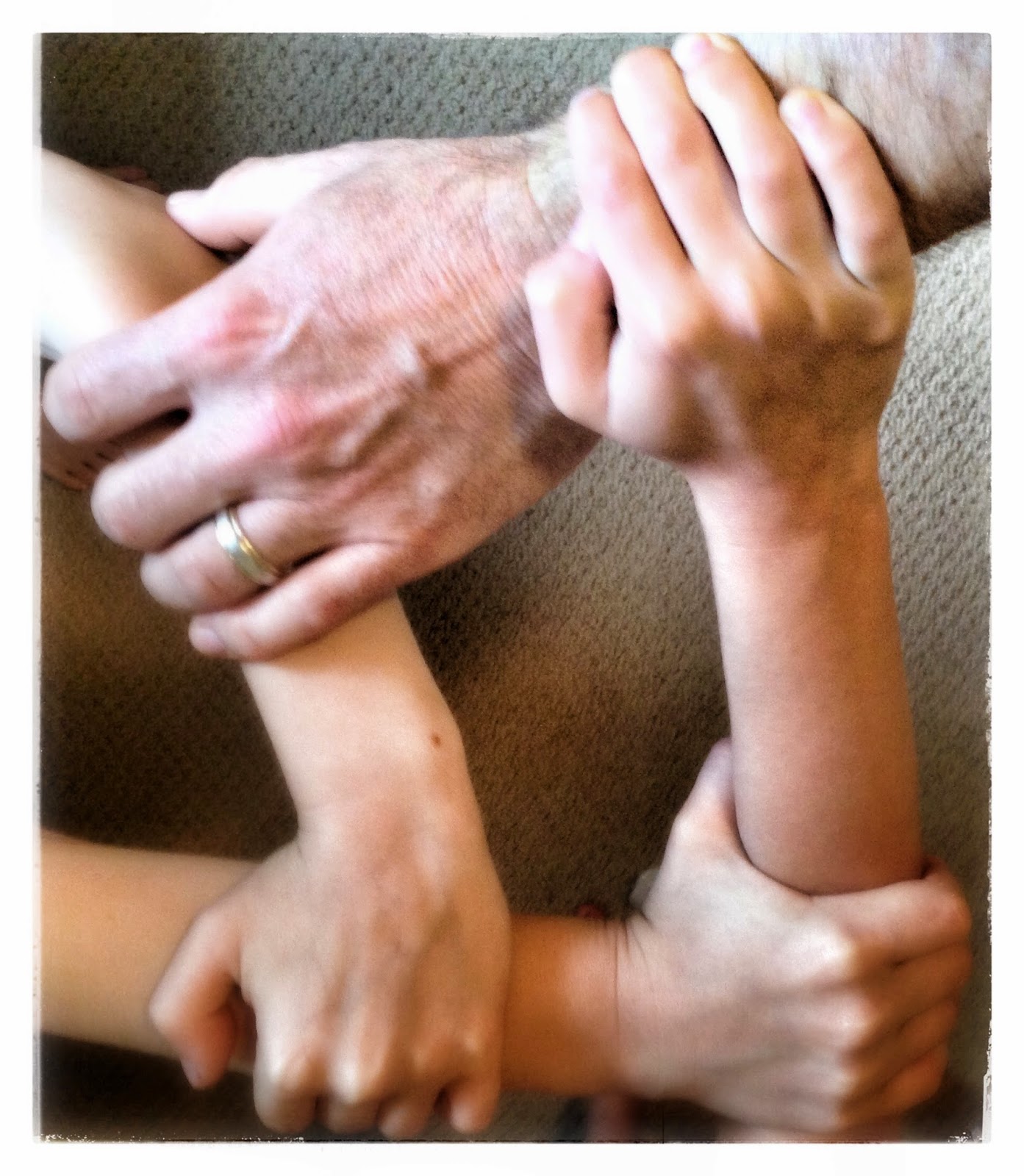 Why connect?  A lot of learning has gone on for thousands of years before the internet came along.  Rulers have been wrought; professors have been produced, engineers have been engendered; teachers have been taught. So why be electronically connected? Why would a class tweet out its learning? Why would students have a Google Hangout with a company miles away? Why would one class Skype another? Because they can?

Right now the ice in West Antarctica is retreating.  In fact, this melt is deemed unstoppable.  Global sea levels will begin to rise.  Shorelines will change; areas will flood; coral reefs and entire habitats could disappear. Our children will be dealing with some serious climate change issues.  To prevent further damage, the world must band together.  We will all rise or fall. . .together. We must connect.

Researchers in the International Space Station are using the microgravity environment to further understand cancer.  German biologist Gabriela Grimm sent up the Danish thyroid cancer samples on the American SpaceX3 Dragon berthed by the Canadarm2.  All of us will deal with the effects of cancer in some way.  We are fortunate to have people from around the globe working on such a cause. . .together.  We must connect.

And the global  issues persist: poverty, war, famine.  And the local issues accumulate: funding for education, sedentary children, peer orientation in students.  Only in working out differences and working together will we be able to tackle the issues.  And what about learning in schools?  Isn't cancer and climate change far removed from the local school?  Not a bit.

We connect because we can effect change.  Now.

The possibilities are endless.  And we've just gotten started.  Here are a few things we do. 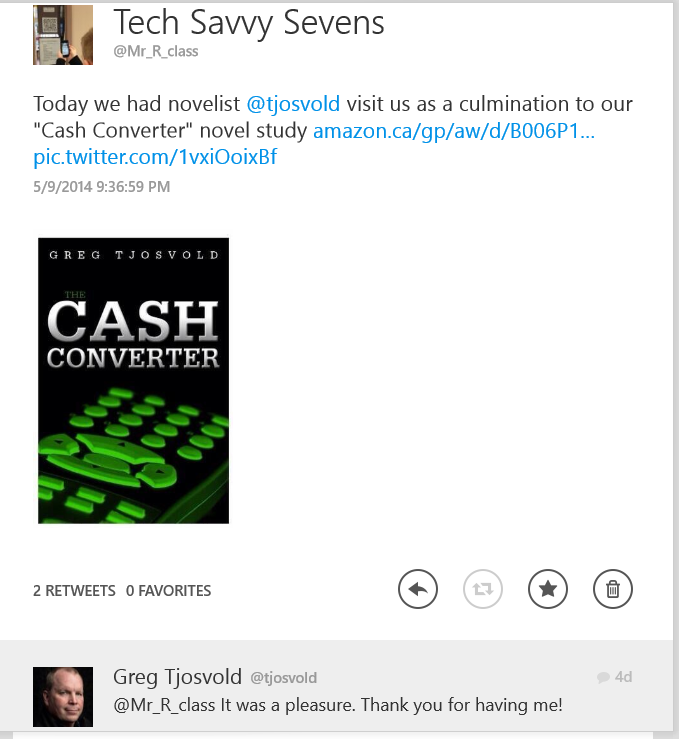 Greg Tjosvold is a local educator and author. He was offering a class set of his middle school level novel "Cash Converter" over twitter.  It was for free to teachers on the understanding that they would provide feedback.  I jumped on this one.  This wasn't an impersonal purchase of a well-established author's work.  This was a grassroots find.  A nugget in our own backyard.  Not only was the book great for us to use for our literature circles but we were able to have him visit our class.  We gave him pages of feedback.  We helped him and he helped us.

To start our new poetry unit, we used Nicholas Gordon's Poems for Free site.  Hey, gotta love free.  I tweeted him the night before to let him know that we would probably be tweeting from our class our reactions to his poems.  He was nice enough to oblige.  We read through many of his teen poems, shared how we felt about them using Today's Meet, then sent some feedback right to the author. 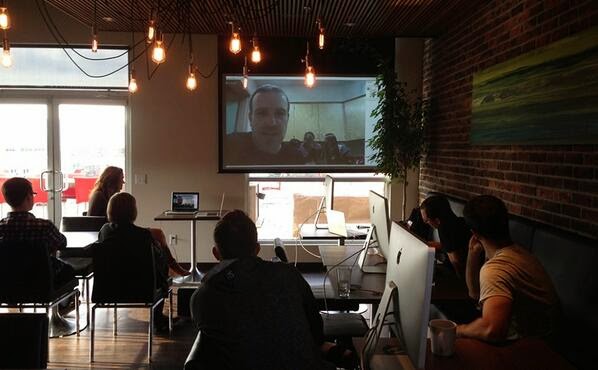 When people from FreshGrade, the game-changing assessment app, asked our class to share their knowledge on project-based learning, several students jumped at the opportunity.  Hey, why not Skype into a company's lunchroom and share?  Each student prepared what they were going to say.  They were well-spoken and knowledgeable.  They were able to respond when asked questions.  Everyone gained here.  My students shared with a real audience who was truly interested in what they had to say.  And I believe the picture of project-based learning became clearer to the Freshgrade staff. 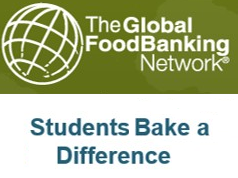 One of our projects called Addressing an Issue has been like the gift that keeps on giving.  Students selected a local or global issue that they would like to make an effort to address.  Two of my students sold baked goods to raise money to support The Global Foodbanking Network.  Well, GFN asked if they could share an article on these students.  Once again, the students had to craft something.  They created an article sharing their story and lobbying for more support to address world hunger.  They emailed GFN a genuine piece of writing that was shared on the website.

In all of these examples, our e-communications connected us up with the real deal.  We had genuine audiences.  Genuine audiences are much easier to find with electronic connections.  But more-so, my students were able to make a difference, help an author, a company, a cause.  And connections breed more connections.  A class can't start with curing cancer or halting global warming; but they can certainly make a difference with the 200 days they have together.

Because I want my students to be able to touch the world from the classroom.

Posted by Sean Robinson at 07:29 No comments:

The Year of Learning Dangerously 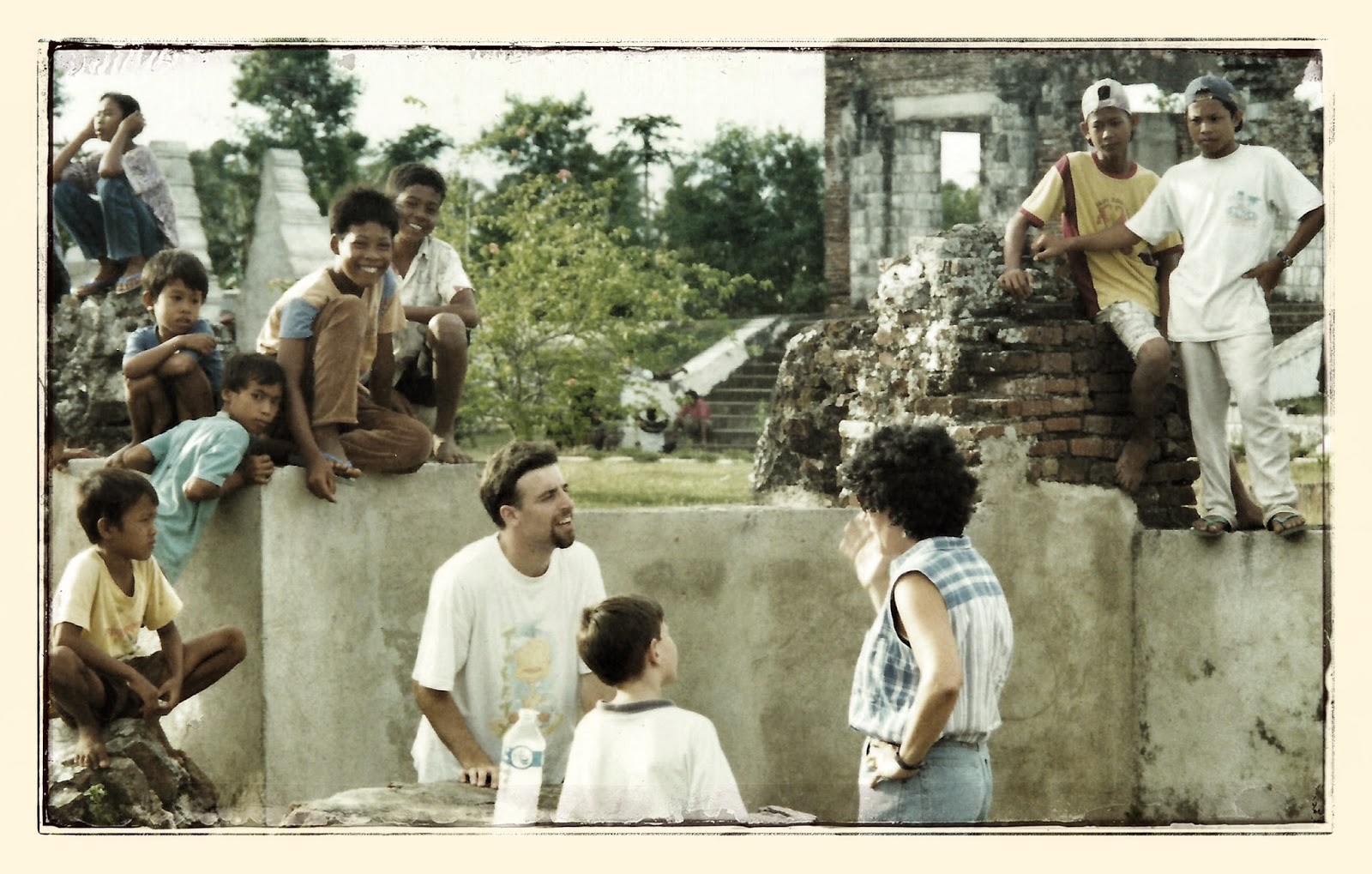 Australian journalist Guy Hamilton (played by Mel Gibson) came to Jakarta to report on the political unrest surrounding President Sukarno and his Communist Party of Indonesia.  The times were tumultuous. Indonesians were facing stark conditions.  Army generals were gaining strength as they grew suspect of Sukarno and his Chinese connections.  Hamilton began on his own, facing unacceptance from the foreign correspondent community.  And though he met some that were willing to enfold him, he found himself alone, injured and caught in the middle of a military coup at the climax of the Indonesian crisis.

This historical fiction movie, "The Year of Living Dangerously", is near and dear to my heart as I lived in Indonesia under the rule of President Suharto, Sukarno's successor.  In fact, I was in Indonesia during Suharto's last days as president.  I remember the trucks full of supporters driving through the streets with flags waving the colours of Megawati's democratic red or the Development party's green or Suharto's gold.  In fact, every day was an adventure during my years in Indonesia.  I experienced discrimination, language barriers, culture shock.  And a lifetime's worth of tremendous life changing experiences.

I mention this as I reflect on my past year of being a connected educator: The Year of Learning Dangerously.  It was about this time last year that I asked my students to take their phones out of their pockets and lockers and begin to use them for their learning.  I felt like I was alone in this (though I was trailblazing a well trodden path).  There was a community out there doing much the same.  But I wasn't connected with them.  I took steps to join in the community.  I began to take risks, blogging, tweeting and learning from the collective.  Slowly my connection grew with other educators. 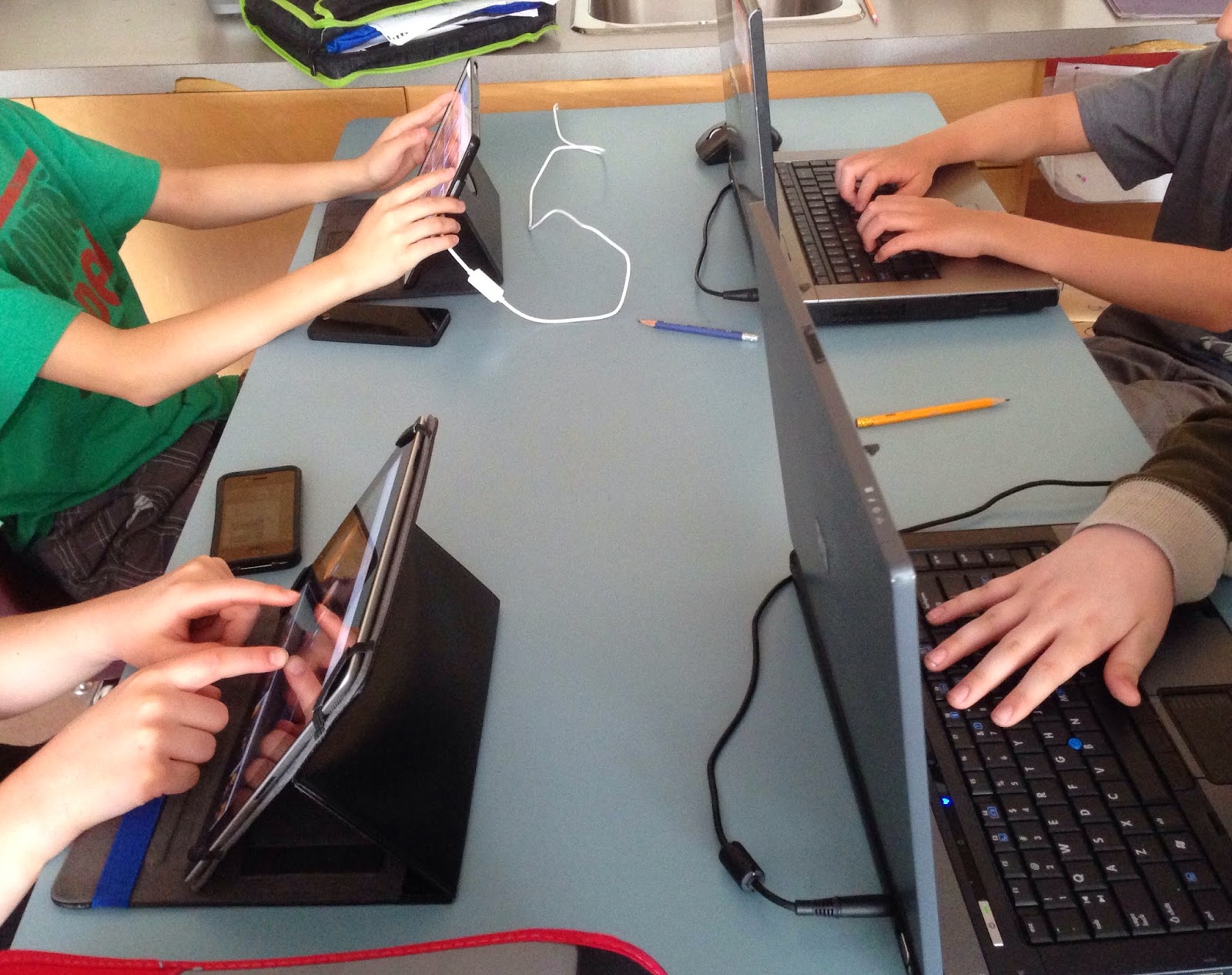 Prologue
It began with my quest for students to use their devices in class, something I learned later to be called BYOT--bring your own technology (your device, apps, tech knowledge, online connections).  I knew it was right; I just didn't know anyone else was doing it.  I used my expanding connectivity to pursue apps and a learning management system.  But as I was learning I was intrigued not by the tech but by the teaching.  Soon a desire for skype chats, class tweeting, and student blogging lead to a pursuit of project-based learning and inquiry.  I rearranged all the British Columbia learning outcomes into projects and shared about it in Throwing the idea of subjects out the window.  I began "share-learning" (or is it learn-sharing) on project-based learning, sharing my first #pbl post: Project-based Learning for Dummies. Looking back, my connections were leading me well beyond what I was looking for.

Rising Action
All through this year, though, there was a tension: a pull back to the familiar.  I began my year with an attempt to flip my class.  I put math videos on Edmodo and had students complete IXL homework--a completely paperless response to a Math program.  I also began with a project-based learning Math challenge to measure the dimensions of my peculiarly shaped class and make suggestions for classroom re-creation.  Both activities started strong but weren't fully realized.  Regarding flipping, some parents wanted a textbook, others found it too foreign to embrace.  And for my PBL assignment, I was so inundated with slurpy machines and theme park suggestions for my classroom that very little changed other than the table placement.  Invoking lasting change wouldn't be easy and wouldn't come without challenges.

Character Relationships
Whether it was the connections I made at ISTE13 or through twitter, my growing PLN (Personal/Professional Learning Network) helped me develop.  Guy Hamilton would have gotten nowhere, if it wasn't for Billy Kwan (Linda Hunt) his local photographer.  He saw in Hamilton what others didn't and arranged interviews with key people.  Soon Hamilton was not only able to see what was really going on, he found himself in the midst.  That can be a dangerous place.  I am still learning how to leverage the PLN without getting engulfed in the vastness of the connections.  Can connections increase without becoming unwieldly? 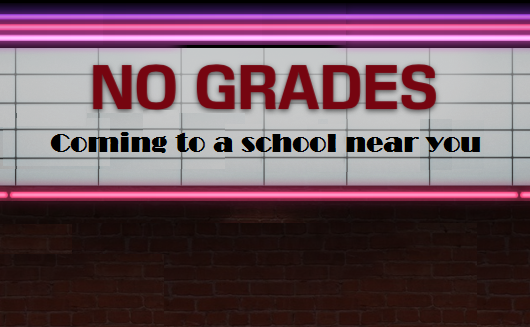 The Climax
This was the year of looking for genuine activities and drawing students to pursue truly ungooglable questions.  In the midst of seeking a better pedagogy, I began to question the structure of the whole thing.  I was led to write a more controversial blog post in No Grades: coming to a school near you.  This was by far my connected climax as I had educators on both sides of the issue chime in.  Pedagogically, I had a never-go-back break through with a project I called: Addressing an Issue.  Students were asked to address a local or global issue that they felt strongly about.  I asked them to truly do something about it.  And they did.  I share what happened in The Problem with Project-based Learning. It was messy learning; it was great learning.

The Denouement
I guess this post has been like one of those sitcom episodes where most of the cast gets a night off and two of the characters reminisce through a series of flashbacks, a way to stretch out the content for one more episode.  But reflection is good.

It is a time of great possibilities.  There is an unrest with the status quo: a Connectivity Revolution if you will.  Those reading this will all have their own stories around first steps to connection.  And when faced with what one sees and hears during the revolution, a moral obligation ensues.  Now that I see what the possibilities are, I am morally obligated to pursue them.  Like Plato's cave allegory, once you see the sun, can you ever be happy returning to the cave and its shadows? Each educator participates in a story.

The Year of Living Dangerously is actually a love story.  Amidst the revolution, Guy Hamilton realizes what is important and what he needs to do.  His connections, particularly with Jill Bryant (Sigourney Weaver), beat out his need for a breakthrough story.  It's the people that make the difference.  And it is knowing how to connect that leads us to realize: we are not alone anymore.
Posted by Sean Robinson at 11:55 No comments: 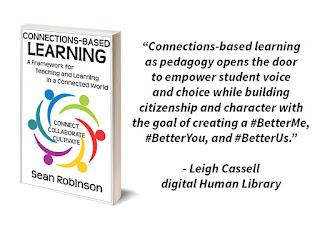